About 2am I was woken and almost thrown off the bunk. “Oh no! Not again!” I thought, “Another weekend of crap weather and I can’t even blame Karen!”.  I tried to sleep some more but only managed a few more hours sleep in the big seas.

We arrived at Seven Skies (details of which can be found here) around 9.30am and managed to do one dive.  Getting into the water with twin tanks and two deco bottles was interesting in the 2-3 metre swell.  I was conducting the TDI extended range course with Goh and Georgie.  The plan was a 45m dive and a 55m dive at Seven Skies.

Unfortunately the weather decided to change those plans.  We did manage to do one dive completing a bunch of skills including a no mask ascent for Georgie.  The currents from 10m to the surface were really strong, I have experienced worse conditions, but this was still bad.  The second dive at Seven Skies was cancelled to ensure everyone’s safety.

Mr Angry and Revo Roat got inside the Seven Skies Wreck and Mr Angry took some nice shots, as per below (if you click on the thumb nail you will be able to view the picture full sized, then click on the back button to return to this trip report):- 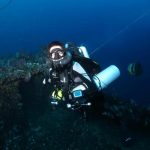 I understand during the first dive the other recreational diving groups lost fins, several weight belts and had an out of air diver.  So cancelling the second dive, although disappointing to all my gang diving tech and CCR, was a good call.

We headed over to Damar to dive The Pinnacle.  The plan was a 45 metre dive for 10 minutes and 35 metres for 20 minutes.  I kept the dive short to ensure we were not doing a drift deco for too long.  We headed straight down to 45 metres and found this ledge covered in fish, schooling trevally, huge snapper, cobia and two black tip sharks.  Goh and I watched closely as Georgie hung back a bit.  As I turned around to head up to 35m, I looked down and saw a marble ray that was at least 3m wide and next to it was a big ribbon tail ray.

We headed up to 35m to do the skills, including the hated “no mask, out of air swim” and a couple of other skills for the course.

We did another dive at Damar Pinnacle and went back to see the sharks and marble ray again, but they were not there the second time.   We did a few more skills for the TDI Extended Range Course and completed deco and got back on the boat.  We had to wait about 5 – 10 minutes for the boat to come and collect us and we were bouncing around everywhere in the huge swells.

We skipped the night dive, but the rest of the divers went, so we sat back enjoyed the peace.

We woke Sunday morning and the seas were still angry and this delayed are arrival time to the Igara Wreck (details of which can be found here) to 2pm instead of 7am.  The boat was only managing 5.5 knots in the storm.  We had a group meeting and decided to head home.  We got back to Singapore around 7pm.

I was diving with my Liquivision X1 and Liquivision Kaon and this time with the Kaon in tech mode.  The X1 and Kaon had pretty much the same decompression time.  Both computers worked really well and their coloured displays are very easy to view.

Everyone, including me was happy to be back on land.  The seas were rough all weekend.

Cheers – Gary.  And thanks to Scott Clegg for the use of your photos.