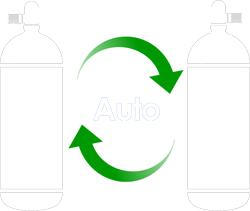 Seamlessy switch between one Side Mount tank and the other one. 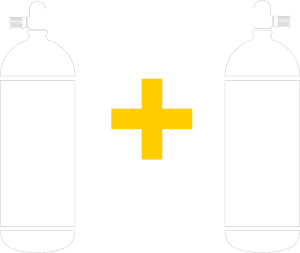 The iDive calculates the RBT
(Remaining bottom time)
considering all the Side Mount tanks
that have the same gas.

You just need to start breathing form the tank, the iDive will automatically change the                transmitter shown on the RBT / BAR screen.

Both pre-installed, in complete versions
and running in Real Time.

You have just to choose from the iDive menu which Algorithm to use for your dive. 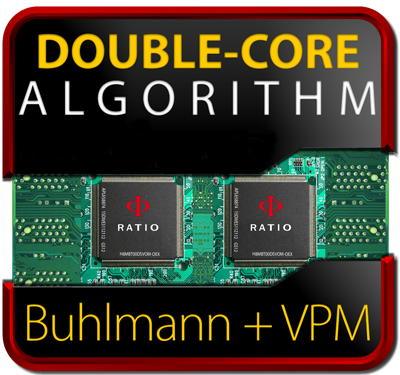 With the iDive you can adjust the Gradient Factors (for Buhlmann ZHL 16-B)
and the Critical Bubble Radius (for VPM-B)Set the iDive’s Algorithm according to your physical conditions
and to the type of dive you are going to perform.Directly from the menu of the iDive computer.
This is a true Technical Dive Computer. 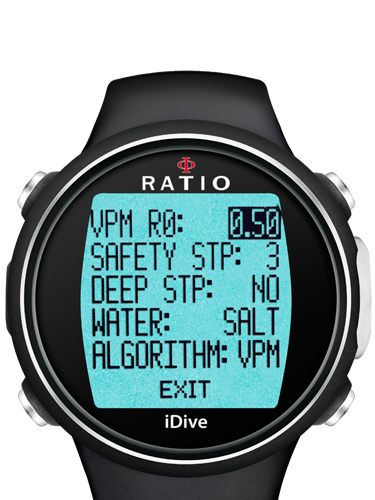 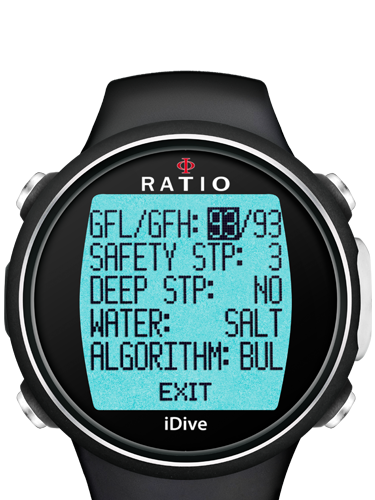 It thinks like a Rebreather
The perfect buddy for your Reb.

Set up to 3 different diluents and set
the Algoritm’s Gradient Factors (or Critical Bubble Radius for VPM).

Perfect backup for your Rebreather,
the iDive Tech+ can be set exactly as
the main computer of your rebreather.

Unique in the World.

The Hardware
The iDive Easy is a wristwatch-style instrument with a 47mm-diameter x 16mm deep polished 316L stainless-steel case and a scratch-resistant sapphire crystal glass face. This solid case gives the computer a depth-rating of 220m.
The 40mm-diameter 80 x 80-pixel matrix LCD backlit display has oversized graphics. Menus and functions are accessed via three of four spring-loaded buttons at the 2, 4, and 8 o’clock positions, while the button at 10 o’clock activates the backlight.
A single long-life USB rechargeable battery similar to those used in smartphones and tablets powers the iDive range. Charging is done via a USB interface cable with gold-plated terminals that bayonet into the iDive’s connection terminal.
The computer has an automatic sleep mode. The display is switched off if the iDive is still for five minutes, which allows for claimed battery burntimes of up to 25 hours in Dive mode, two months in Watch mode and up to six months in Total Sleep mode. As soon as the sensor detects movement, the display is switched on.
The strap is a heavy-duty silicon buckled version supplied with a separate extension for use over bulky exposure suits. The iDive Easy is available in eight colour schemes, and a Sea Jewel version with Swarovski crystals set around the periphery of the face is also available.
A dedicated nitrox analyser can be added for the entire range of Ratio multi-gas computers. This simply connects via the bayonet charging port and automatically calibrates and validates its oxygen sensor. You’ll have to manually set the analysed mix into the computer, however, as current Health & Safety rules don’t allow this to be done automatically.

The Algorithm – Ratio Dive Computers
The Easy model is a two-mix air/nitrox computer employing a real-time Buhlmann ZHL-16B algorithm to calculate tissue-saturation status and accurately and safely formulate repetitive dive-profiles. Safety-stop depths can be user-set, as can the choice of deep stops in a customisable menu system.

Modes & Functions – Ratio Dive Computers
The iDive Easy has Air, Nitrox, Freedive, Gauge, Planning and Logbook modes, standard fare on nearly every available timepiece-style dive-computer, as are Watch and Chronometer modes. However, this dive instrument offers a further array of functions, which include a 3D self-compensating compass, an altimeter with automatic compensation for altitude diving, a thermometer and a barometric pressure gauge.
Again, these functions aren’t unique in the dive-computer world but the iDive range goes beyond that and includes a current moon phase mode in which full, new, waxing and waning phases of the moon can be predicted.
Then there’s a pitch & roll function indicated on both a vertical and horizontal axis and, for the diver who has everything, a magnetometer to help out if you’re looking for something big and made of iron.
For the fitness enthusiasts among us there’s also a pedometer to record steps, mileage and burned calories during those early-morning jogging sessions.

In Use
I dived with this instrument on an intensive seven-day itinerary and, as is usual practice with computer tests, I also took my own tried and trusted model to add a safety net should things not go according to plan.
After taking time to digest the downloaded PDF instruction manual (as best I could) and a simple, short charging process using my iPhone wall-charger, I delved into the menus to set personal parameters such as safety-stop depths, alarms and gradient factors.
I then set the contrast and brightness of the backlight and set it to stay on for its maximum duration of 30 seconds, in the knowledge that the battery could be recharged after each day’s diving.
The menus were accessed with single pushes of three buttons. They’re stiff and left me with sore fingers, but have the advantage of being almost impossible to activate accidentally.
Donning the computer for the first dive, I noticed that the strap was shorter than other models I’ve used, which meant that without the extension strap I had to roll up my wetsuit sleeve and attach the computer around my bare wrist.
My wrists (unlike my belly) are skinny, so this was a surprise, and something chunkier divers might need to take into account.
Under water, the display was easy to read. The crisp LCD matrix had great contrast (especially when backlit) and is set out in such a way as to make assimilating the information shown very easy.
The important stuff such as present depth and no-deco limits are displayed using big and bold fonts with the maximum depth, oxygen percentage or ambient temperature in smaller fonts. Safety-stop information when displayed was counted down in minutes and was instantly recognisable.
I tried a variety of the functions including the compass. Its display was a delight to use, showing the direction not only as large N, S, E and W letters but also in degrees.
I also used the moon-phase utility, a “nice to have” function for calculating the likelihood of clownfish and other marine species having recently laid eggs during a full moon.
I also used the pitch & roll feature to assess my orientation under water accurately (something I’m sure disciplined GUE technical divers would find useful).
Unfortunately nitrox isn’t readily available in Mauritius, so I couldn’t check out the gas modes or use the dedicated Ratio O2 analyser.

Summary
This little wristwatch-sized dive computer did exactly what I expected it to do, in a no-fuss, logical manner. The standard functions can be found on virtually all of the dozens of dive instruments on the market.
In my mind it’s the rechargeable battery that makes the Ratio iDive stand out from the crowd. This was apparent as my own model gave me the dreaded “Low Battery” warning a few dives into this trip, meaning that I would have to go through the inconvenience of packing it up, queuing at the Post Office and spending some money to put it right.
I did find some of the unique extras on the iDive Easy useful. No, as expected, I didn’t use the pedometer, but I did use the moon phase and pitch & roll functions along with the compass.
Although I didn’t get to use it, I think the addition of the dedicated O2 analyser is genius. No longer would I have to queue to use the dive centre’s well-used analyser to verify my gas mix and, unless anyone else had a Ratio, I wouldn’t have to share mine either.
I don’t think I’ll ever need a magnetometer. Big iron-hulled wrecks are normally easy to find – but it would give me the bragging rights down the boozer.

Also check out  the variety of dive computers we carry visit : https://www.gs-diving.com/divecomputers/

Also check out Dive Singapore for the variety of gears we carry visit : https://www.divesingapore.sg/product-category/scuba-equipments/ 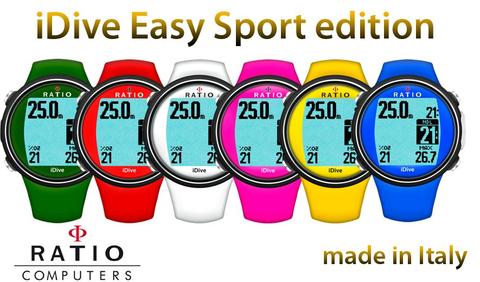